Three brilliant minds that changed construction: with the founder of the company, Conrad Freytag, a new era in construction started. Gustav Adolf Wayss made ground-breaking tests with the new technology possible. Emil Mörsch established the scientific basis for construction with reinforced concrete. Their personalities complemented one another congenially, which contributed to the triumphal success of the new construction method around the world. 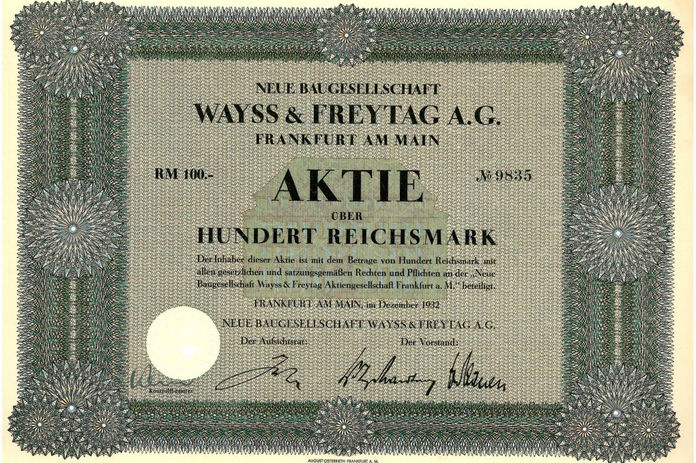 With assistance of Pfälzische Bank (Palatine Bank) the general partnership was changed into a joint-stock company, the Wayss & Freytag AG, on February 1, 1900. The share capital was 1.2 m marks (Reichsmark). The board of the JSC consisted of Conrad Freytag and his son-in-law Otto Meyer. G. A. Wayss became Chairman of the Supervisory Board and remained in this position until he finally left the company in 1903. His position in the supervisory board was then taken over by councillor of commerce Eßwein of Pfälzische Bank.

The newly founded company had to spend a lot of financial resources for the scientific research of monolithic reinforced concrete construction, since Hennebique’s theoretical approach and the practical construction details were not yet fully developed. Unfortunately, a building which was built by a licensee of Hennebique’s in Basel collapsed on August 28, 1901, so that confidence in the new construction method suffered extremely. Due to this, W&F ordered extensive experiments at the technical university of Stuttgart to intensify the knowledge of the elastic characteristics of steel and concrete. The scientific research into reinforced concrete construction was the work of a lifetime of the ingenious engineer Emil Mörsch. 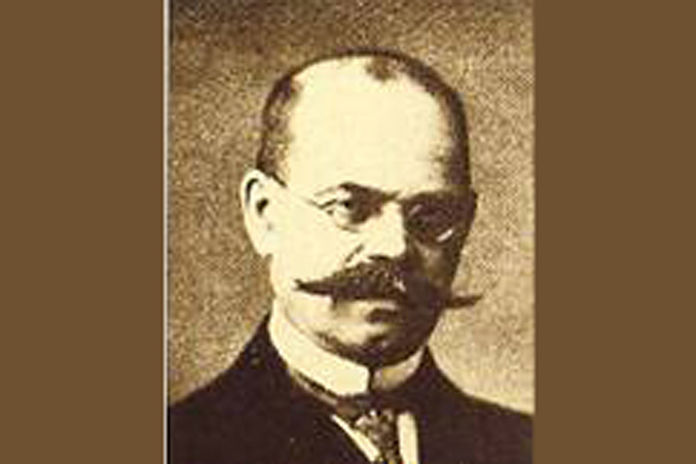 1901
The reinforced concrete will be science

The reinforced concrete will be science

Emil Mörsch was born in Reutlingen on April 30, 1872 as the son of a clothier. After finishing his studies at Polytechnikum (today called Technical University) in Stuttgart in 1894, he was first employed with the Württemberg road and water construction administration as a governmental foreman (Regierungsbauführer). In 1899, he was appointed governmental master builder (Regierungsbaumeister) and was employed by the bridge construction department of the Württemberg State Railway.

Conrad Freytag met him during a construction project in Stuttgart and, as a member of the board, entrusted him with the management of the Technical department of the Wayss & Freytag AG in Neustadt on February 1901. In this function he was not only in charge of the daily business, but also of the development of the scientific principles of the „concrete-steel combination“. On the basis of the Berlin tests, he dealt among others with the calculation of the elasticity of tension and compression of concrete structures with reinforcement, their shear and bending strength as well as the adhesion of reinforcement bars in concrete. In May 1902, he published a summary of his works in the first edition of his well-known publication „Der Betoneisenbau, seine Anwendung und Theorie“ (Concrete-Steel Construction, Application and Theory).

After a professorship at ETH Zurich (Federal Institute of Technology, Zurich) between 1904 and 1908, Emil Mörsch returned to W&F as a director and member of the board. In 1916, he accepted a professorship at the Technical University in Stuttgart as professor for Static calculation of solid supporting structures, arched bridges and concrete-steel construction, but, however, continued to work closely with Wayss & Freytag AG as a consultant.

Emil Mörsch was the outstanding pioneer of reinforced concrete construction in Germany. He also decisively influenced the development of prestressed concrete by making available the Freyssinet method to the broad public in his book „Der Spannbetonträger“ (The prestressed concrete girder). Mörsch died in Weil im Dorf near Stuttgart on December 29, 1950. 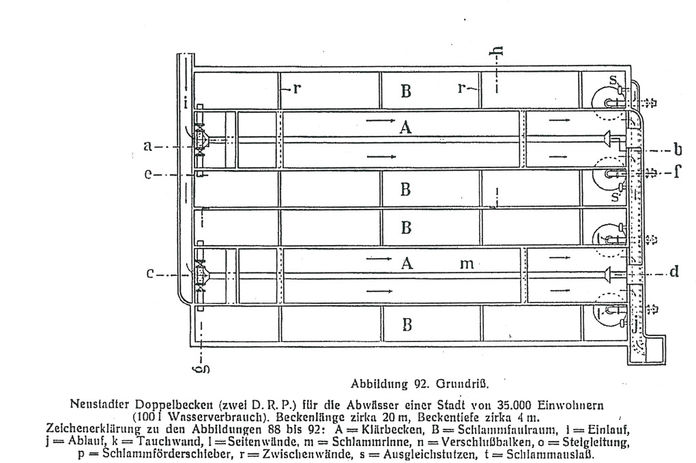 On November 26, 1903 in Neustadt an der Haardt the Wasser- und Abwasserreinigung GmbH, a subsidiary, was founded which successfully dealt with the design and construction of sewage treatment plants. An increasing industrialisation required industrial sewage water to be treated before allowing it enter the public canalisation network. The settling basins were constructed of reinforced concrete and because of the company’s own patents it was in a position to supply the required logistics for the treatment, too.

In the so-called „Neustädter Doppelbecken“ (Neustadt double basin) there were separate chambers for water and mud. The mud that settled in the septic tanks was transported to drained slag beds after three to five months where it could dry and then be cut for further use, for example as soil fill.

The Neustadt settling basin was not only used in municipalities, but also in numerous industrial plants both at home and abroad. Companies in the furnace industry, mining companies and steel mills, coal washing plants and plants in paper, pulp and leather industries were the main clients. 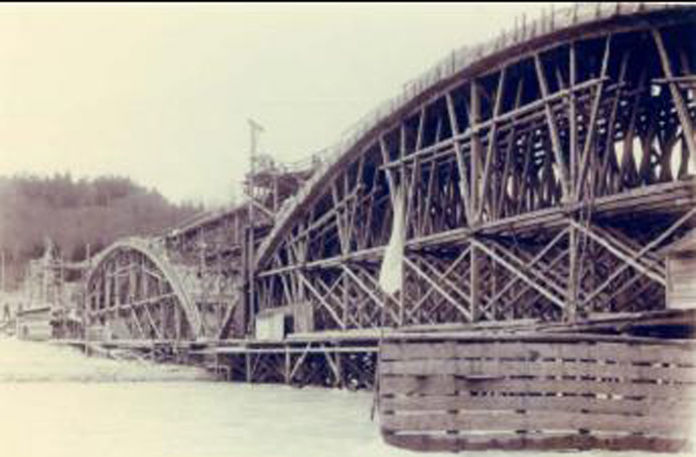 1904
The arch bridge in Grünwald

The arch bridge in Grünwald

The bridge over the river Isar near Grünwald was the first bridge to be designed and carried out by Emil Mörsch in his capacity as technical director of Wayss & Freytag AG. He described this structure in detail in the Schweizer Bauzeitung (Swiss Construction Journal) 1904, volume XLIV.

The structural system of this bridge, which was partly destroyed during the Second World War, consisted of two 70 m wide three-hinged arches with rising heights of 12.80 m. The geometry of this bridge was designed by Mörsch in such a way that the arches were only exposed to compressive, but not to tensile stress. To increase the load bearing reserves, however, each of the arches was reinforced at the top and bottom by 9 reinforcement bars Ø 28 mm. The thickness of the arch was 75 cm at the crest and 90 cm at the abutment.

A five-web reinforced concrete T-beam, which was elevated every 4 m, served as roadway slab. The total length of the bridge spanning over the river bed of the Isar and the works canal of the electric power station was 220 m. The construction period was one year and the construction costs amounted to 300.000 Marks (Reichsmark). 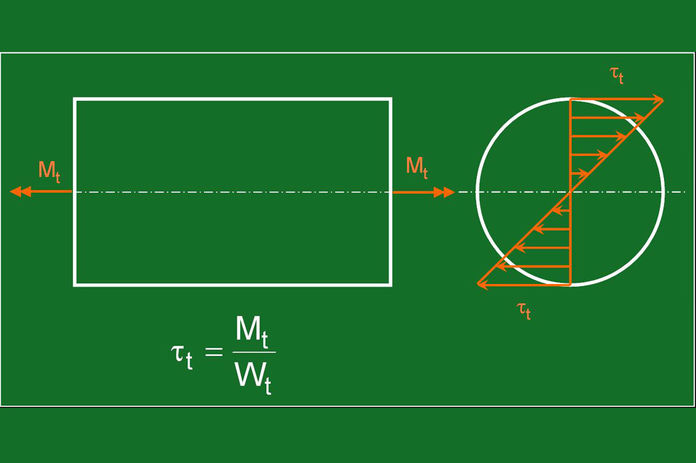 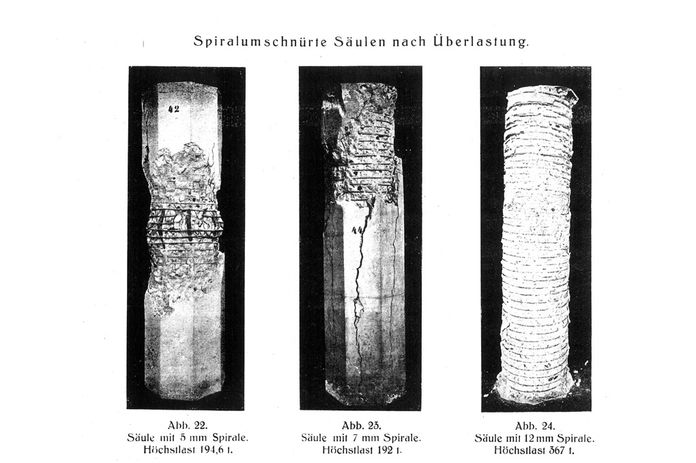 In March 1904, Wayss & Freytag AG acquired the French patent for helically reinforced concrete (spiralumschnürter Beton) (Béton fretté) from Armand Considère, „Inspecteur Général des Ponts et Chaussées en retraite“ in Paris. Considère had placed an additional helical reinforcement with a narrow winding on the outside of the concrete core of reinforced concrete columns which were exposed to a high axial pressure.

After W&F had acquired the sole right to execution for Germany, they approached the material test institute of the Technical University in Stuttgart to carry out extensive tests on helically reinforced columns in 1905. Emil Mörsch described the load increasing effect of such helical reinforcement in the 4th edition of his book „Der Eisenbetonbau“(“Concrete-Steel Construction”). W&F granted the execution right to their competitors for individual projects and supplied prefabricated spirals. 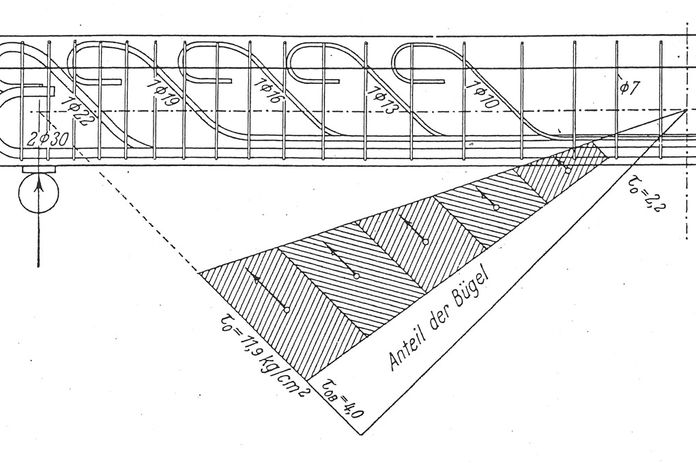 In 1906, the company carried out extensive tests on T-beams and continuous beams in Neustadt an der Haardt, the focus of which were the acquisition of data of realistic shear forces and their calculative recording. The test results enabled Emil Mörsch to substantiate his theory on shearing stress which was summarized in „Fachwerkanalogie“ (“Analog to structure work”), which was named after him, and to publish the 3rd edition of his textbook „Der Eisenbetonbau“ (“Concrete-Steel-Construction”) in 1907. This edition, which had now grown to 376 pages, was also published in French, English and Italian for the first time.

During the Concrete Day (Betontag) in 1907, Emil Mörsch explained his theory on the basis of shear diagrams. The practical findings for continuous beams also gained in Neustadt corresponded with the theoretical assumptions. Mörsch was able to prove convincingly that shear bendings at intermediate supports were superior to stirrup reinforcement.

In the following years, with few exceptions, further tests were carried out by the „Deutscher Ausschuss für Eisenbeton“ (German committee for reinforced concrete). On recommendation of Mörsch, however, Wayss & Freytag ordered a remarkable series of tests at the material test institute MPA Stuttgart: 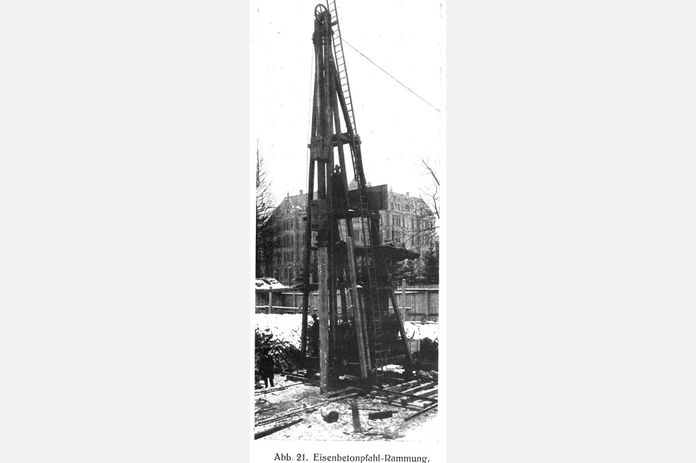 The first prefabricated reinforced concrete piles, the production of which was to be a further mainstay of Wayss & Freytag AG for more than 70 years, were driven in Stuttgart-Bad Cannstadt in 1906. Already within the first 20 years another 600 km of bored piles followed.

The prefabricated piles where highly popular, especially in Northern Germany. In Hamburg numerous prestigious buildings were founded on W&F piles:

The variety of products, ranging from the standard cross-section to customized manufacture with an enlarged base and achievement of extraordinary foundation depths by means of non-bending steel couplings, made these piles technically and economically unrivalled for many years. 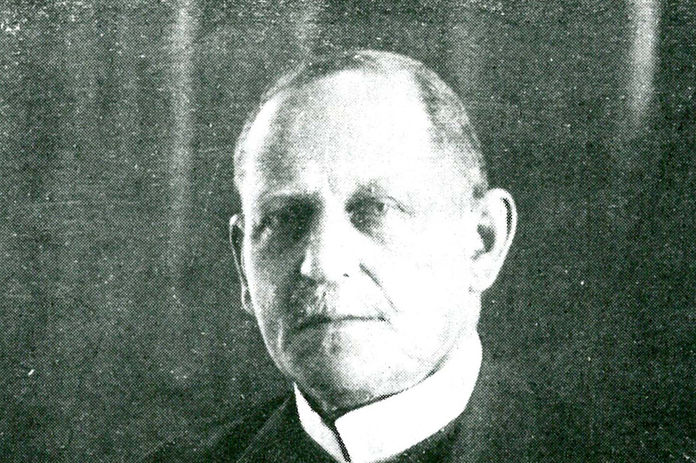 1907
Foundation of the "Deutscher Ausschuss für Eisenbeton" in Berlin

Foundation of the "Deutscher Ausschuss für Eisenbeton" in Berlin

The „Deutscher Ausschuss für Eisenbeton” („German Committee for Reinforced Concrete“) was founded on January 9, 1907 and has its head office in Berlin to this day. Authorities of the German “Reich”, the federal states and municipalities as well as universities, material test institutes, construction companies and the German Portland cement industry were represented on this committee. The committee was under the leadership of the ministry of public works and the committee’s aim was to prepare standardized regulations for the execution of reinforced concrete works throughout Germany.

Wayss & Freytag delegated Emil Mörsch and the former chief executive Otto Meyer to this committee. The funding of comprehensive financial means which were required to carry out tests in all fields of reinforced concrete was provided by authorities and industry. The tests were distributed to all material test institutes and the results continue to be published to this day in a scientific series published by the committee.

In the 4th edition of his book „Concrete-Steel-Construction“, Mörsch published the findings gained from the committee’s tests with regard to bending, axial pressure with bending, shear stresses and the correlation between bending moments and deformation angles. Another important finding was that statically indeterminate reinforced concrete constructions could be calculated in the same way as those consisting of homogenous building material.

In 1916, the committee published the „Requirements for the execution of building structures in concrete and reinforced concrete“, which were consistently introduced in all German federal states. 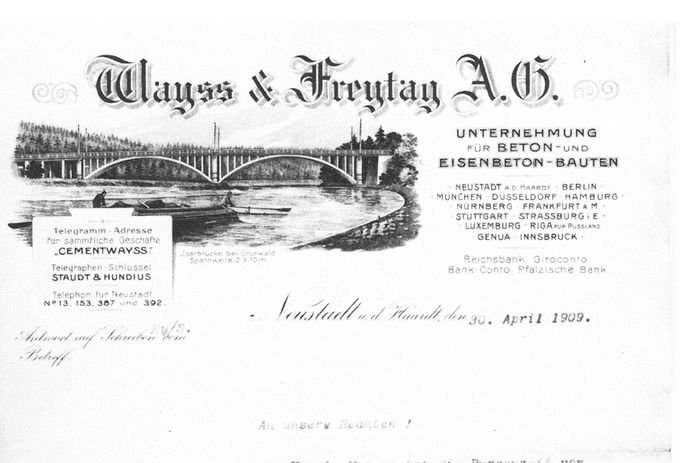 Another 10 years had to pass until the 8 hour working day on six working days a week was introduced. An entitlement to leave was not introduced until 1921 and was, however, very moderate. The leave entitlement was a mere three working days a year at a minimum employment with the company of 40 weeks.