Already early in the company’s history the activities were not limited to the Palatinate. In 1910, the company already had twelve branches in Germany. In 1903, the first foreign branch was established in Riga. Further registered offices in Luxemburg, Strasbourg, Vienna, Innsbruck, Rome, Milan, Trieste, Genoa, Naples, Budapest, Messina, Sarajevo, St. Petersburg and Buenos-Aires followed. 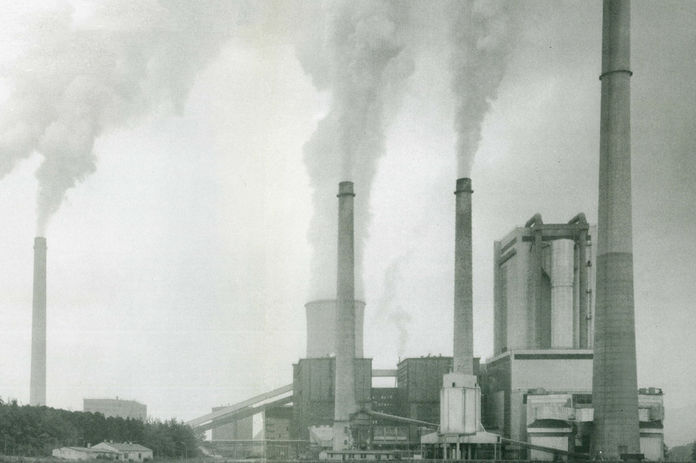 The long tradition of chimney construction at Wayss & Freytag has its origin in 1911. However, until 1929 the chimneys were built with moulded bricks up to a height of 124 m due to a lack of appropriate formwork systems.

First calculation methods for chimney construction can be traced back to Emil Mörsch and Karl Deininger, both of which were head of “Technical Department”, as it is called today, for many years and later professors at the Technical University in Stuttgart. 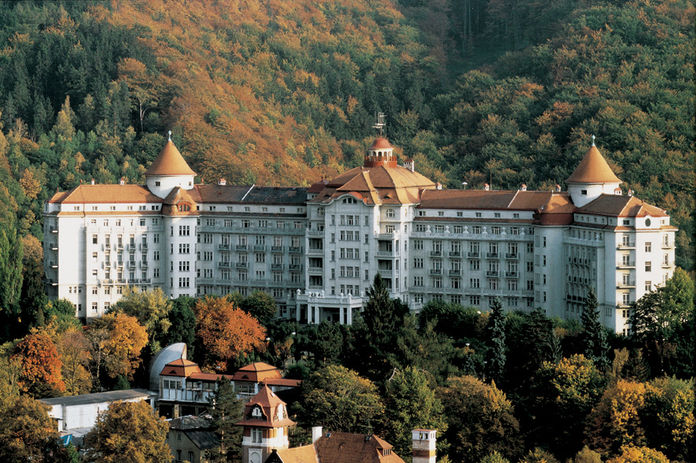 1911
The hotel IMPERIAL in Carlsbad

The hotel IMPERIAL in Carlsbad

The Hotel IMPERIAL in Karlovy Vary, which was completed in 1911 after a turnkey construction period of only one and a half years by Wayss & Freytag AG, is still operating to this day as ««««hotel. It is situated on a hilltop which encloses the city in the South. Since the ground floor was located approx. 8 m below ground, 25,000 m³ of granite had to be blasted before the construction works could be started.

At completion, the hotel had 264 lettable rooms with 400 beds and 88 bathrooms (today: 219 rooms with en suite bathrooms and 405 beds), as well as several lounges and its own post office. According to the state of the art at that time, each room was equipped with a cold and hot water supply and a low pressure steam heating. The greatest attention was paid to a highest possible standard of noise reduction, contrary to some „modern“ hotel buildings. Since the contractor, an English lord, ran out of money during the construction period, W&F completed the hotel at their own expense and also put it into operation.

Today, the spa hotel IMPERIAL still offers a stunning view over Karlovy Vary and dominates the city by its exposed position and size. 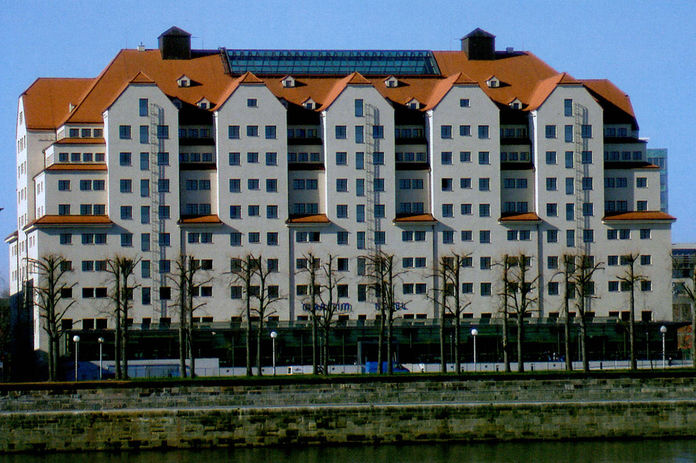 In the years 1913 and 1914, Wayss & Freytag built the „Erlweinspeicher“, a large storehouse for tobacco and cotton on the banks of the River Elbe in the old “Packhofviertel” quarter. The municipal storehouse, which was designed by the architect and then municipal councillor Hans Erlwein (1872 – 1914), was the first reinforced concrete frame construction in Dresden. The official handing over to the municipality took place on June 19, 1914 after a construction period of only 15 months.

Since 1890 several store- and warehouses were built in the Devrient Street area. Due to its size “Erlweinspeicher“ dominates the cityscape at the edge of the historical city centre to this day. After all, the building is 76 m long, 36 m wide and up to the roof ridge 39.50 m high and has a floor space of approx. 20,000 m². The building captivates with its clear structure and functionality and its uniquely designed roof. Since May 2006, the conference hotel MARITIM is located in the former storehouse which had undergone reconstruction while keeping the historical façade. 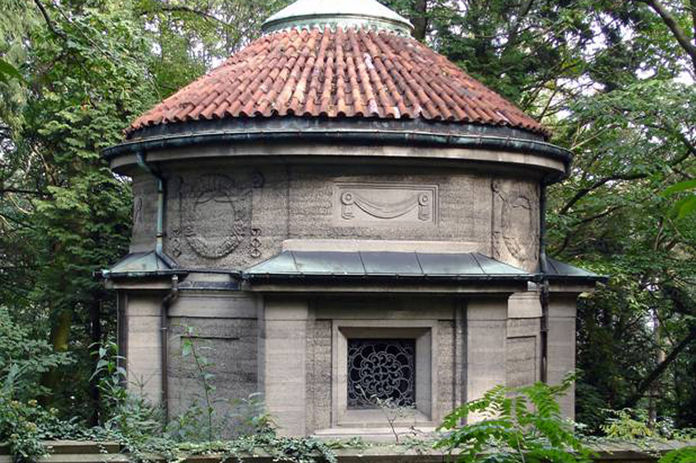 Conrad Freytag was not only popular with all his employees because of his open nature, but also in his home town Neustadt a. d. Haardt, where he was a municipal councillor from 1895 to 1920. Because of his contribution to the field of reinforced concrete, he was awarded with the title „Kommerzienrat“(councillor of commerce) by the Bavarian prince regent in 1905. On August 7, 1916, his 70th birthday, the town of Neustadt made him honorary citizen. In spring 1918, the Technical University of Darmstadt awarded him the title “Honorary Dr-Eng.” because of his contribution to the development of concrete-steel-construction.

His tireless and unresting commitment to the company did not leave Conrad Freytag untouched. After having been faced with serious health problems, he had to move from Neustadt to Wiesbaden to undergo a permanent medical treatment there. On August 27, 1920 a farewell party was organized for him in Neustadt during which he was once again reassured of the great admiration and affection of his employees.

In Wiesbaden Conrad Freytag had to undergo painful treatments which did not improve his poor health. Despite his weakened physical state, his mind was as keen as always. On July 2, 1921 he died after a protracted illness. After his cremation in Mayence, Conrad Freytag was buried in the family mausoleum in Neustadt an der Haardt. 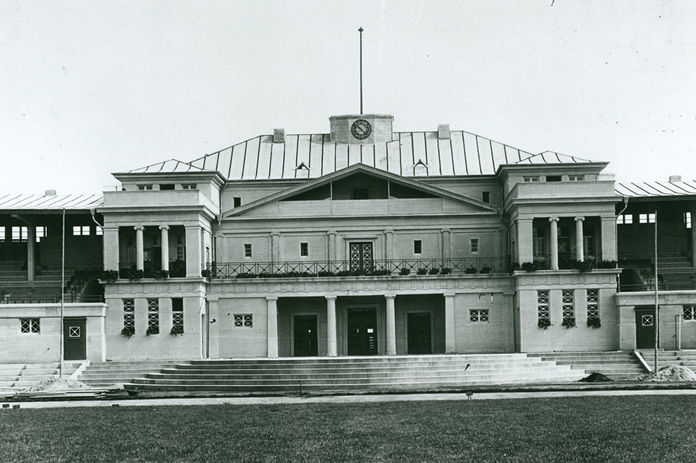 On August 25, 1921 the Frankfurt city council meeting decided to build the Waldstadion (soccer stadium) on the territory of the former military shooting range. The stadium, which was built by Wayss & Freytag AG, was opened on May 21, 1925. The design of the 120 m long stands and administrative building was based on the design of an ancient Greek theatre. The circular tiers could seat 37,000 people.

The first big national sports event took place in Waldstadion on June 7, 1925. It was the final of the German Soccer Championship which the local team of FSV Frankfurt lost by a mere 0:1 against the title holder 1. FC Nuremberg. From July 24 to 28, 1925 the „International Workers Olympic Games“ took place. These were considered an antipole to the Olympics which were already commercially disputed at that time. 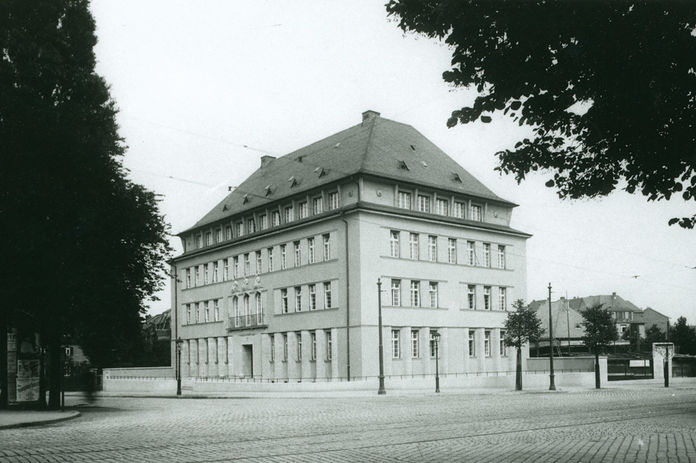 1925
Relocation of Headquarters to Frankfurt a. M.

Relocation of Headquarters to Frankfurt a. M.

After the First World War had been lost and Palatine had been politically separated from Deutsche Reich and renamed Westmark by the occupying forces, the extraordinary general meeting of Wayss & Freytag AG which took place on February 2, 1923, decided to relocate the company’s head office from Neustadt an der Haardt to Frankfurt am Main. Customs barriers which had been introduced by the occupation authorities in Palatine plus the restricted ability to move about and the closing down of railway transport, the loss of important business areas caused by cession of Saarland and the occupation of Alsace-Lorraine by France, were all reasons to relocate to the free Frankfurt.

In spring of 1924, suitable premises were found at Wilhelmsbrücke, corner Wilhelmstraße and Schaumainkai, and the construction of a new administrative building started. Since it proved impossible to find rented flats for the employees who were affected by the move due to the housing control, an own residential building had to be built in Waidmannstraße.

The head office’s move took place in the second half of 1925, after it had been possible to present very positive annual accounts for 1924 during the general meeting on May 19, 1925. 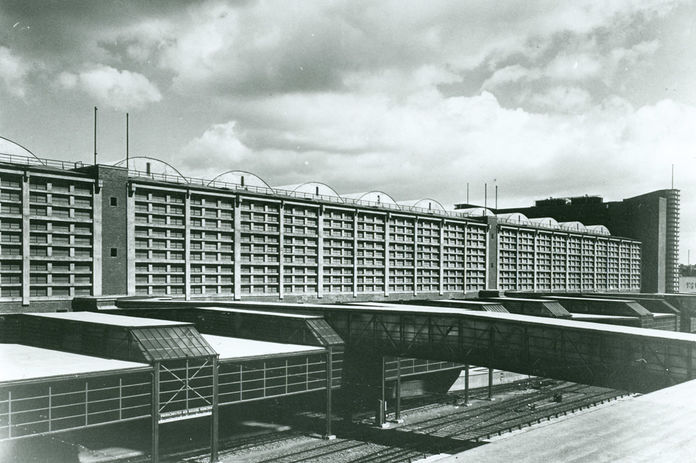 1928
The Grossmarkthalle is Frankfurt's largest building

The Grossmarkthalle is Frankfurt's largest building

The Großmarkthalle (wholesale market hall) in Frankfurt am Main, which in the vernacular is affectionately called “Gemieskerch” (vegetable church), was built in a joint venture from 1926 to 1928 and inaugurated on October 25, 1928. With approx. 13,000 m² building area, the total complex in Frankfurt Ostend (East End) was at that time the largest building in Frankfurt.

The 200 m long and 50 m wide hall has a barrel (tunnel) vault roof with spans of 14.10 m per vault and a thickness of only 7 cm. Wayss & Freytag, as a pioneer of reinforced concrete construction, had already successfully carried out such thin shells in Germany previously.

On June 4, 2004 the market hall, which was designed by the architect Martin Elsässer (1884 – 1957), who was head of the building construction department of the Frankfurt am Main city council from 1925 to 1932, was closed and the central market was moved to Kalbach-Riedberg. The building, a protected monument since 1984, has been owned by the European Central Bank since January 1, 2005 which will use the former market hall as a conference, media and visitors´ centre. 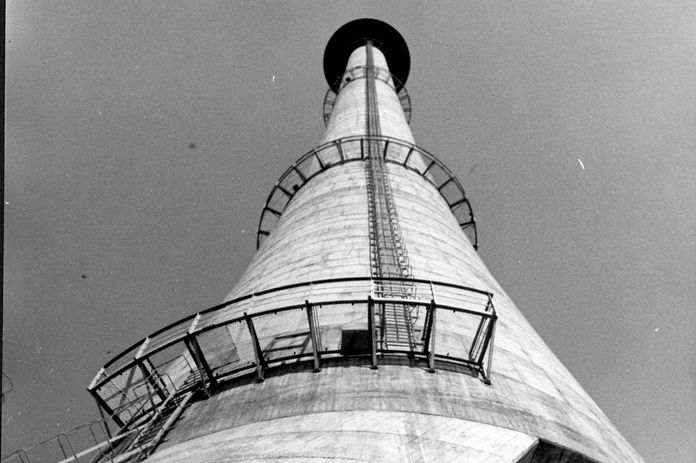 In 1929, once these could be used economically, chimney construction was revolutionised by the use of climbing forms. Already during the first year Wayss & Freytag built four of such monolithic chimneys, among others for Schwandorf power station.

Climbing forms have significant advantages in the construction of conical reinforced concrete shafts compared to the conventionally built chimney:

The formwork which was used by W&F went on to be used successfully for 50 years. During this period Wayss & Freytag successfully built more than 160 chimneys with a height of up to 235 m with this system as well as telecommunication towers in Stuttgart, Dortmund, Hamburg, Koblenz, Frankfurt und Nuremberg and numerous smaller standard telecommunication towers for Deutsche Bundespost (German Federal Mail). 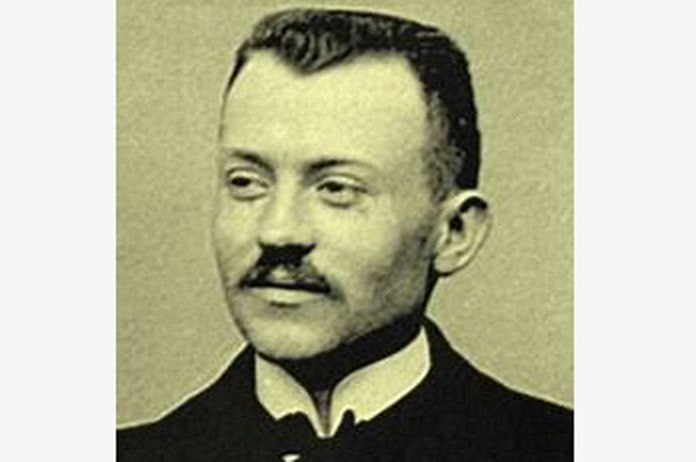 Eugene Freyssinet (1879 – 1962), who studied at Ecole Nationale des Ponts et des Chaussées in Paris, is generally considered to be the inventor of prestressed concrete construction. Although a certain P. H. Jackson had already registered a first patent in the US in 1886 and W. Döhring in Berlin in 1888, it was Freyssinet who had the decisive insight into the reason for and the elimination of enormous losses in tensile force. By using high-tensile steel he was able to compensate for the losses in tensile force due to creeping and shrinking of concrete and relaxation of prestressing steel to such an extent that the method became economical.

In 1928, Freyssinet registered his prestressing method with a compressive stress of 400 N/mm² under the headline „Production method for reinforced concrete components“ in France. The term „Prestress“ he first mentioned in 1932. In 1934, Prof. Karl Walter Mautner, a member of the board of W&F until 1933, acquired the general licence for the Freyssinet Prestressing System for Wayss & Freytag, which was the hour of birth of prestressed concrete in Germany. In 1935, W&F introduced the term „Spannbeton“ (prestressed concrete) in Germany and substantiated the effectiveness of the new construction method through numerous tests with prestressed concrete beams. 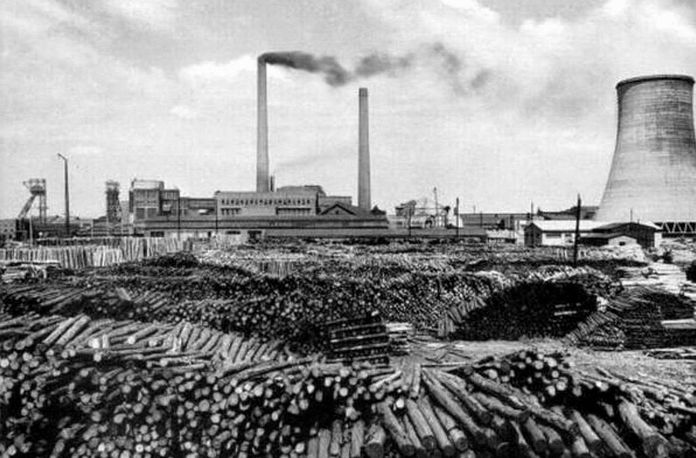 In 1938, Wayss & Freytag introduced the hyperbolic natural draught cooling tower in Germany together with the machine building company Balcke, Bochum. After the construction of the large Espenhain power plant near Leipzig, until the end of the war another 20 towers of this type with an output of up to 12,000 m³/h were built in central Germany. In 1948, this tradition was continued with the construction of the first tower after 2nd World War for the Wilhelmine Victoria coal mine in Gelsenkirchen and remains a core competence until today.

In hyperbolic cooling towers, the construction method of which never became obsolete– see Datteln power station – the chimney wall has the form of a rotating hyperboloids. The wall has to be calculated for the load cases own weight, wind and thermal stresses, whereas the load case temperature is the decisive factor for the calculation. The cooling tower shell is based on raker piles which ensure maximum aeration.

To ensure a non-deformable formwork for the chimney walls, high precision is required and above all a firm formwork. This, in particular, requires the expertise of our in-house concrete technology department, since the walls must be watertight and und acid resistant. 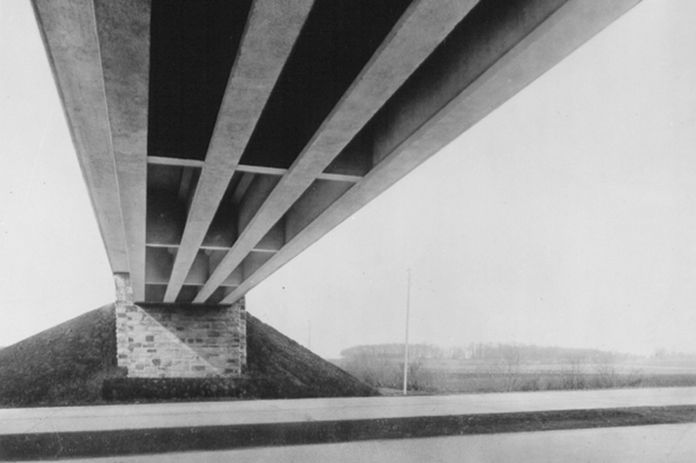 In 1938, Wayss & Freytag built the Hesseler Weg Bridge near Oelde in Westphalia which is still in operation today. This bridge was the first bridge in Germany to be built with prestressed prefabricated girders in accordance with the patent of Eugene Freyssinet.

The T-beam bridge crosses the A2 with a span of 33 m; it is considered to be a milestone in Germany and Europe, since it meant the breakthrough of prestressed concrete in bridge construction. Freyssinet was not allowed to build his five bridges over the river Marne (Annet-sur-Marne, Ussy, Trilbardoux, Esbly und Changis-sur-Marne) in France until this bridge had been successfully completed and put into operation.

Because of the war, the real triumphal procession of prestressed concrete in Germany did not begin until the 1950ies.