The project is one of the first and most important structural strengthening projects in the Lusatia coal region. Together with the federal government and the state of Brandenburg, DB is supporting the transformation and creating new, high-quality industrial jobs. After completion of the second factory hall in 2026, there will be a total of 1,200 new jobs. In the process, DB is relying fully on digitalisation and automation: Cottbus will become DB's most modern maintenance plant.

Olaf Scholz, Federal Chancellor: "The construction of the new railway plant in Cottbus shows how structural change can succeed. Such innovation projects not only create good jobs - they also bring new economic power and future viability to the entire region."

Richard Lutz, CEO of Deutsche Bahn: "The new plant in Cottbus is being built at record speed. Today we are breaking ground symbolically - and in just two years' time we will be servicing the first ICE 4 trains here. At the same time, we are creating exciting and state-of-the-art jobs in an area with a promising future. We need this new plant so that our ICE fleet can continue to grow and so that more people can travel by train. This is the only way to achieve our climate targets."

Dietmar Woidke, Minister-President of Brandenburg: "Today sees the launch of a beacon project for structural change in Lusatia. Deutsche Bahn and the Federal Government have kept their word. My thanks for that. This strengthening of the site is a central element in the development of Lusatia into a model region for climate protection and economic growth. Also because up to 1,200 new industrial jobs are being created here. Things are clearly moving forward - especially when you consider that this railway plant was threatened with closure just a few years ago. Balancing out the jobs that are being lost with new jobs that have a future is an absolutely necessary prerequisite for successful structural development in the course of the phase-out of lignite. The plant is to go into operation two years earlier than originally planned."

Michael Theurer, Federal Government Commissioner for Rail Transport: "Rail secures more than half a million jobs in Germany. New technologies with highly qualified jobs make this environmentally friendly mode of transport increasingly attractive. With a clear focus on this mode of transport, we are not only actively protecting the climate but also pursuing a comprehensive employment and structural policy. This plant is another positive contribution to structural change in the Lausitz lignite mining region. Because the investments made here strengthen both the region and rail transport throughout Germany."

As part of the Group's "Strong Rail" strategy, DB is continuously expanding its ICE fleet. By the end of the decade, around 450 ICE trains will be on the rails. By 2024 alone, the number of ICE 4s will grow from just under 100 at present to 137 vehicles. More trains require more maintenance capacity. The new plant in Cottbus makes an important contribution to this and ensures that the trains get back on the track quickly and that more people can travel in climate-friendly comfort.

Visualisation of the new factory

The new factory halls are being built on the site in front of the existing DB location in Cottbus. The first hall has two tracks and is 445 metres long; the other hall will have four tracks and be 570 metres long. This will make it DB's first facility for the heavy maintenance of ICE 4 trains. The trains will be partially dismantled and heavy components such as bogies will be replaced.

The special thing about the workshops: The 374-metre-long XXL-ICE with 13 carriages and 918 seats can also enter in full length. Two of the shorter ICE trains, each about 200 metres long, with seven carriages each, fit on the tracks one behind the other. This means that employees can work on all the carriages at the same time, which speeds up the maintenance of the trains. The overhaul of an ICE 4 with all the necessary work steps should take less than two weeks in the new plant. Until now, such an overhaul of an ICE took up to five weeks.

New: Raised tracks provide ergonomic workplaces in the workshops where employees can easily work on side flaps and wheel sets. Bogie changers specially developed by DB have been inserted into the hall floor. This allows employees to move the bogies out sideways for further processing without heavy lifting. The components can also be changed much more quickly, which is why the trains have to be in the factory for a much shorter time than usual and are back in service for the customers more quickly.

Investments of one billion euros are planned on the basis of the Coal Regions Investment Act. With this law, the federal and state governments are supporting the regions affected by the coal phase-out in Brandenburg, Saxony, Saxony-Anhalt and North Rhine-Westphalia in creating sustainable jobs and new economic structures.

Wayss & Freytag Ingenieurbau AG, together with Rhomberg Sersa Rail Group, Arcadis GmbH, LOGSOL GmbH, is the contract partner for the realisation of the new ICE maintenance plant. For the first time, Deutsche Bahn is relying on the innovative "rail partnership model", which is being scientifically supported by the Technical University of Berlin. Thomas Paetzold, member of the executive board of Wayss & Freytag Ingenieurbau AG, took part in the ceremony and emphasised: "As the executing construction company, we are looking forward to working with all those involved in the rail partnership model. With its partnership-based and transparent concept, the innovative pilot project sets new standards in the planning and execution of complex construction projects." 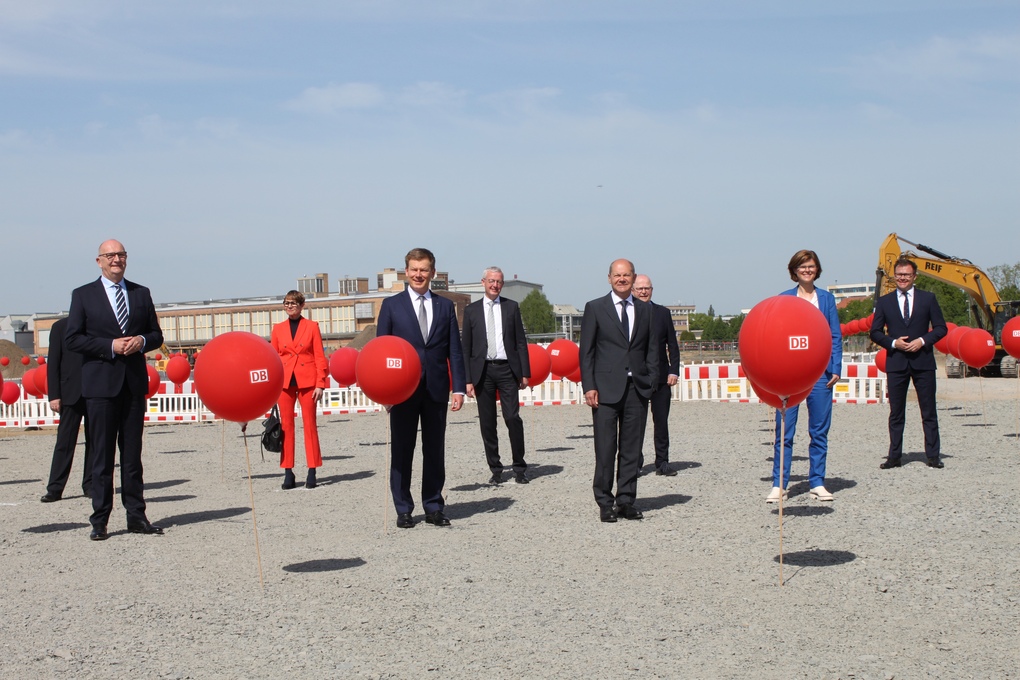 Groundbreaking ceremony for structural change: construction of the new railway plant in Cottbus begins. On the construction site, 500 red balloons made the layout of the new factory visible. They also symbolised the first 500 new jobs and apprenticeships that will be created here by 2024. Pictured: Dietmar Woidke, Minister-President of Brandenburg; Jörg Steinbach, Minister of Economics of Brandenburg; Marietta Tzschoppe, Mayor of Cottbus; Richard Lutz, Chairman of the Management Board of DB AG; Guido Beermann, Minister of Infrastructure and State Planning of Brandenburg; Olaf Scholz, Federal Chancellor; Michael Theurer, Federal Government Commissioner for Rail Transport; Daniela Gerd tom Markotten, Member of the Management Board for Digitalisation and Technology DB AG; Carsten Schneider, Minister of State and Federal Government Commissioner for Eastern Germany.