S-Bahn connection for 18,000 employees • Scheduled operation starts on 15 December • Around 13,000 journeys a day shifted from road to rail

Relief for both the roads and the environment: On 15 December, after only three years of construction, the S-Bahn connection to the new Gateway Gardens district at Frankfurt Airport will be put into operation on schedule. With 18,000 future jobs in office and conference buildings, hotels, restaurants and retail, the business park can now be reached from Frankfurt main station in just under ten minutes using lines S8 and S9. According to forecasts, thanks to the new rail connection, around 13,000 journeys a day will be shifted from road to rail. This is expected to lead to 27 percent less traffic on the adjacent road network.

"With the rail connection, we – the state, region and railway – have created an attractive and efficient connection. A very concrete contribution to the climate and mobility change. With the infrastructure programme "Frankfurt RheinMainplus", in close co-operation with the federal government and the railways,the region has been committed to increasing the capacity and quality of rail transport for years. "Today is a milestone for this," said Ronald Pofalla, Member of the Management Board for Infrastructure of Deutsche Bahn, at the grand opening of the new connection.

Together with Tarek Al-Wazir, Hessian Minister for Economics, Energy, Transport and Housing, City Councillor Klaus Oesterling, Head of Department of Transportation of the City of Frankfurt / Main and Prof. Knut Ringat, Managing Director and Spokesman of the Management of Rhein-Main-Verkehrsverbund (Transport Association), Pofalla drove into the new station in a special train of S-Bahn Rhein-Main. There, around 400 guests welcomed the first S-Bahn to Gateway Gardens.

Tarek Al-Wazir, Hessian Minister for Economics, Energy, Transport and Housing, emphasized the importance of an attractive public transport system for the positive development and attractiveness of a location: "Thousands of employees, hotel guests and visitors to the companies and institutions based in Gateway Gardens will now have a direct S-Bahn connection - the Gateway Gardens station creates an attractive alternative for commuters, improves the rail infrastructure in the Rhine-Main area and helps to relieve both the road network and the environment. And for the district itself, it is a location factor, because a public transport connection is becoming increasingly important for companies looking for a new location."

Prof. Knut Ringat, Managing Director and Spokesman of the Management of Rhein-Main-Verkehrsverbund, said about the new connection: "The new Gateway Gardens station is a quantum leap for the public transport connection of the district. With 211 departures per day, our passengers benefit right from the start from a continuous 15-minute cycle, which brings them to the airport, Wiesbaden, Frankfurt or Offenbach without having to change trains - and - with the Regional Tangent West (RTW) - the future will provide even more connections. In addition, the station is a prime example of how fast planning and fast construction go hand in hand, and is thus a role model for all other major projects. "

City Councillor Klaus Oesterling, Head of Department of Transportation of the City of Frankfurt / Main, emphasized the advantages of the direct connection for Frankfurt: "With the new S-Bahn connection and, in a few years’ time, the RTW, many thousands of employees will finally get an attractive connection to the public transport system. Only high-quality connections such as these offer the people in Frankfurt and the region an alternative to the car and thus the traffic turnaround can succeed. "

Dr. Michael Blaschko, CEO of Wayss & Freytag Ingenieurbau AG, commented on the challenges of tunnelling: "We are pleased that with the fast completion of the two-kilometer tunnel section and the new Gateway Gardens station, we were able to contribute towards improving the transport infrastructure in the Greater Frankfurt area. That makes us as a company proud and grateful at the same time. The new transport link enables fast, comfortable and sustainable mobility."
The four-kilometer-long new S-Bahn line between Frankfurt Stadium and Frankfurt Airport Regional Railway Station with the new Gateway Gardens S-Bahn station was built in just three years. A tunnel two kilometers long had to be built under the Frankfurt motorway junction - one of the busiest road junctions in Europe - without restricting the traffic running on ten lanes. The investment volume of the S-Bahn connection Gateway Gardens amounts to 300 million Euros.

From the timetable change on the night of Sunday, 15 December 2019, the S-Bahn trains S8 and S9 to and from the airport will have a scheduled stop at Gateway Gardens. The first scheduled S-Bahn trains to reach the new station will be the S9 towards Hanau at 0:17 a.m. and the S9 towards the airport at 0:41 a.m. Thus, on 15 December, the seven-week total closure on the route Stadium - Airport Regional Railway Station –Kelsterbach ends.

The S-Bahn connection Gateway Gardens is part of the infrastructure development programme Frankfurt RheinMainplus, which is jointly promoted by the Federal Government, Land Hesse, City of Frankfurt / Main, Rhine-Main Verkehrsverbund and DB AG (German Railway). Information about this programme: www.frmplus.de
Further information on the S-Bahn project to Gateway Gardens can be found at www.s-bahn-gatewaygardens.de 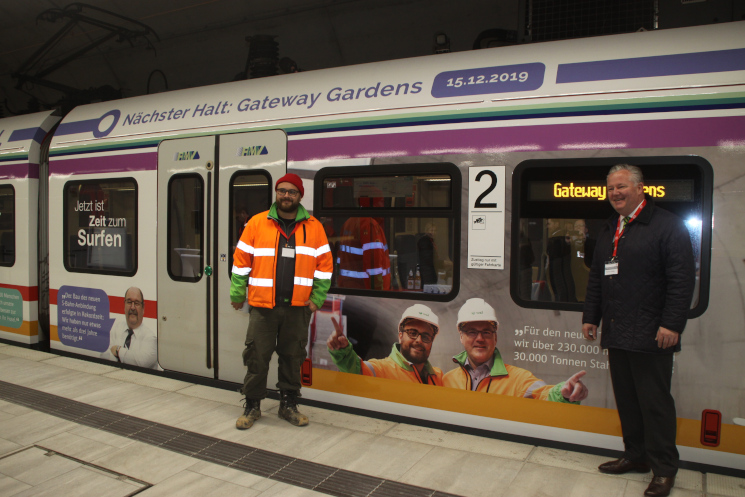