Internationally, infrastructure projects are often realised as PPP projects. In Germany, it is early days yet with regard to privately financed public traffic infrastructure projects. However, the government, federal states and municipalities are increasingly discovering the advantages of projects realised in a partnership. The mobilisation of private funds can also help realise urgent construction projects. With PPP projects, the construction project is privately financed, planned, built, operated and maintained, thus ensuring that the project is constructed economically and to the highest quality standards. These projects can be realised significantly earlier, irrespective of the state of public finances. The economic advantage is immense. Maintenance works are optimised as needed, so that interruptions to traffic are reduced to a minimum. To date, Wayss & Freytag Ingenieurbau AG has realised two PPP projects in consortia with experienced, high-performing partners and has been awarded the contract for another project, the construction of the federal motorway BAB A 94. This project started on February 1, 2016. 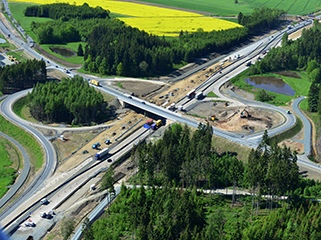